Why are HTFs also known as Body Farms?

The term ‘Body Farm’ is frequently used by members of the public and some of the forensic science community to refer to Human Taphonomy Facilities (HTFs), however many people are unaware of the term’s origins.

It started with the opening of the worlds first HTF in 1981 by Dr. Bill Bass at the University of Tennessee’s new Forensic Anthropology Center. For over a decade the facility was simply referred to as the Anthropological Research Facility (ARF). However, in 1994, a book was published by Patricia Cornwell entitled ‘The Body Farm’, the fifth book in the Dr. Kay Scarpetta series. The story revolves around an FBI agent investigating the murder of an 11-year-old girl who turns to a “clandestine research facility in Tennessee known as The Body Farm” to find answers. The story isn’t based on any particular real life case, but the inspiration for facility in the story clearly comes from the ARF.

Although the book itself isn’t particularly well known in the general public the name ‘Body Farm’ has stuck ever since and effectively become the unofficial for name for HTFs across the world. There was also a TV series with the name ‘The Body Farm’, about an HTF, broadcast in the UK in 2011.

The term ‘Body Farm’ is understandably controversial, as it conjures images of body parts being ‘grown’ or cultivated, or zombies bursting out of burials. For many, it sounds gruesome or disrespectful to those individuals who have selflessly donated their bodies to the advancement of forensic science.

Unfortunately, the term is catchy, grabs attention, and seems to have stuck.  The Anthropology Research Facility at the University of Tennessee has embraced it, proudly calling its facility The Body Farm. The advantages of this term is that people tend to have heard of it, and have some idea of what a ‘Body Farm’ is, whereas far fewer people are familiar with the more scientific and respectful term ‘Human Taphonomy Facility’. Until we can spread the word, and make ‘taphonomy’ a well-known term, it looks like the name ‘Body Farm’ will be used for the foreseeable future.
Posted by HTF4UK at 02:54 17 comments:

North Michigan University is getting an HTF too!

Although it hasn't been featured in the media as much as Florida's new facility you may also be interested to know that North Michigan University is also soon to be one of the very few places in the world to have a Human Taphonomy Facility. As I mentioned in my last post, this shows that HTFs are becoming more and more accepted by the public and forensic science communities and hopefully the news of new facilities opening will soon become a regular occurrence all over the world.

The facility is to to be used as a part of the University's new Forensic Anthropology programme being developed for the Autumn of 2017. The primary aim for this HTF is to study the freeze and thaw cycle on human cadavers in the Michigan climate. The 2.5-acre site, which was acquired by the university for only one dollar, is located four miles from the university campus and will be mainly used by forensic science students at the university, but it is also intended for police forces, cadaver dog trainers, and other forensic teams to be invited to use the facility.

Three facilities studying human decomposition have now been announced this year and it's only March! A UK facility has to be next!
Posted by HTF4UK at 07:25 15 comments:

Florida is getting an HTF!

If you keep up with the world of Forensic Science then you may already know that it has been announced in the past couple of days that Florida is set to become host to the seventh 'body farm' in the United States. This is fantastic news as it shows that HTFs are becoming more and more accepted both by the public and by the Forensic Science community as a viable and necessary way to answer the profound questions we have about the process of Human decomposition.

The facility, located just North of Tampa, will be called the Florida Forensic Institute for Research, Security and Tactical Training - thankfully this has been shortened to FIRST! The facility is being hailed as state-of-the-art as it will be used as a proving ground for new forensic technology and techniques, such as virtual autopsies that use a combination of 3D scanning and CT technology, as well as providing a secure location to study human decomposition and train HRD dogs. Although the climate in Florida is similar to what the HTFs in Texas will experience, the everglades and some of Florida's unique wildlife will provide a large amount of new forensic issues to be solved.

With new 'body farms' also being proposed in Michigan and Amsterdam and Australia's AFTER facility now up and running successfully it is surely only a matter of time before an institution in the U.K. recognises that U.K. Forensic Science is severely lagging behind the rest of the world and takes the leap forward to develop our own HTF.

First of all thank you for all the support in the opening weeks of this blog going live, it is very much appreciated!

In this post I thought it would be good to give people an idea of who is behind the computer screen controlling the HTF4UK blog and twitter account. I'm Joe, the first placement student to be a part of this push for a UK based Human Taphonomy Facility.

At this moment in time I have completed two years of my Molecular and Cellular Biology course at the University of Huddersfield. I have always had a keen interest in Forensic Science, which was further reinforced after seeing a documentary about 'body farms'. Upon completion of this year long placement I'll be going into the final year of my degree with the hope of doing either a master's or PhD in Forensic Science after graduating.

Please keep checking back for more updates and spread the message to family, friends and colleagues!

Welcome to HTF-4-UK, a forensic science project from the University of Huddersfield!

The aim of this project is to raise awareness of Human Taphonomy Facilities (HTFs), but also to conduct a survey into the public opinion of HTFs. With enough participants the outcome of this will help to ascertain whether or not developing the UK's first HTF is a viable proposition. To go straight to the survey click here!

Keep coming back to this page for more updates on how the project is going, or you can follow our Twitter page @HTF_4_UK.

Thank you very much! 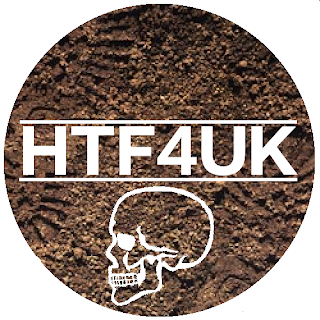